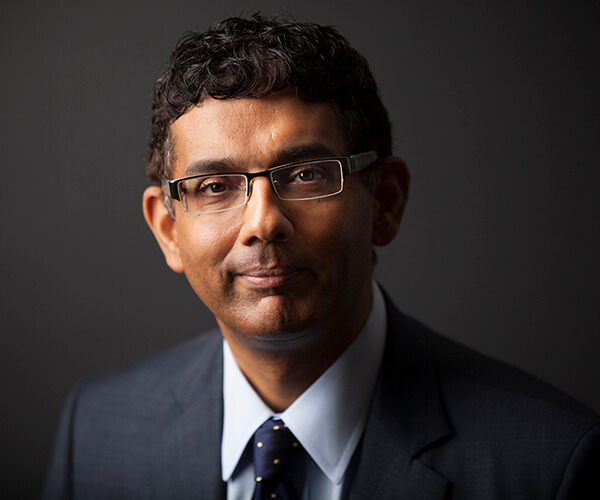 Dinesh D’Souza has had a prominent career as a writer, scholar, and public intellectual, and has also become an award-winning filmmaker. Born in India, D’Souza came to the U.S. as an exchange student at the age of 18 and graduated Phi Beta Kappa from Dartmouth College. Called one of the “top young public-policy makers in the country,” D’Souza quickly became known as a major force in public policy through his books, speeches, and films.

D’Souza has won numerous awards including “Best Documentary” for America (The Dove Foundation), and he has been called one of the “top young public-policy makers in the country” by Investor’s Business Daily.

As the author of over 15 nationally renowned books—many of them #1 New York Times bestsellers—D’Souza has been invited to speak to groups all over the country on politics, philosophy, and Christianity. His razor-sharp wit and entertaining style have allowed him to participate in highly-publicized debates about politics and Christianity with some of the most famous atheists and leftists of our time, including Christopher Hitchens, Bill Ayers, and others.

One of D’Souza’s favorite venues for debates and speeches has always been college campuses. During the past 25 years, he has appeared at hundreds of colleges and universities and spoken with hundreds of thousands of students in these live settings.